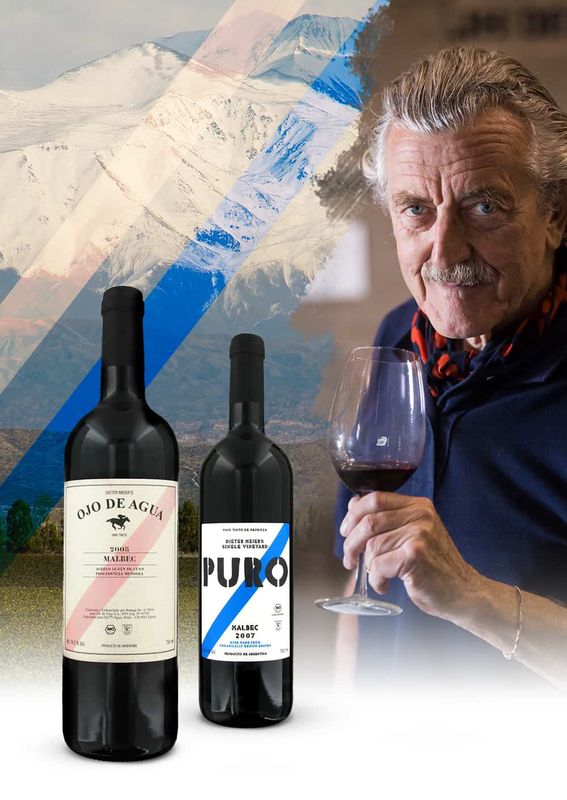 Dieter Meier – musician, entrepreneur and owner of Estancia Ojo de Agua in Argentina. A jack of all trades. Or as he prefers to call himself: a producer. Whatever Dieter Meier touches bears fruit. Sometimes – and not infrequently – so good that his name is suddenly mentioned in the same breath as those of the most successful organic farmers and wine producers. But Ojo de Agua is no longer just an organic farm in Argentina where happy cattle graze and sweet grapes grow next to lush green meadows. There are now Ojo-de Agua outlets in Zurich, Frankfurt, Berlin and Buenos Aires, where Dieter Meier's precious treasures are sold. But back to the roots. The Zurich jack-of-all-trades realized a dream and bought an estancia in Mendoza, where he produces organic beef and organic wines of the highest quality in collaboration with oenologists, restaurateurs and ranchers.

With the purchase of the estate in Agrelo Alto, Meier made a clever move, since the region is considered the best wine-growing region in Mendoza, Argentina. The region is known for its sandy, mineral-rich soils and unique climate, which allows winemakers to let their grapes fully ripen – because fungal attack is a foreign word here and fungicides can be sought in vain. As an organic winemaker, Dieter Meier is also particularly proud of this. The half-migrated Zurich native is far from bored. He is already working on other projects. We are curious about his next adventures, but in the meantime we look forward to enjoying a glass of «honest wine» as the great maestro likes to say with a little pride.