On the Wave of Success

«Anyone who is fully confident cannot be stopped by the wind or the weather. Our hero António Maçanita shows everyone how it's done: A storm destroyed his first vineyard, yet the passionate surfer didn't give up. Today he rides the wave of success that he's had with his wine products. When we founded Flaschenpost, it was our goal to make all of the world's wines available in one location. There is so much to discover in the world of wine – or would you have guessed that really good wine is made in the Azores, in the middle of the Atlantic?»

«Our wines are made by the sea.» – António Maçanita

Unique drops from the middle of the Atlantic

In fact, everything began with a misfortune. At the age of 20, António Maçanita had only one thing on his mind: surfing. He wanted to study marine biology, messed up the course numbers, and accidentally ended up in agricultural sciences. A nudge by fate perhaps? In any case, the die was cast – and today the surfer rides on the wave of his wine products' success. However, the sea has remained his linchpin, as António makes wine on the Azores. The Portuguese island group in the middle of the Atlantic is a natural paradise that most people only know from weather services. This is because the high-pressure region of the same name has a strong influence on the weather. On the Azores, one has the impression that all natural forces are found here in their most extreme forms: rain and sunshine frequently alternate, wind usually whips across the countryside, the sea rages, volcanos seethe, and earthquakes shake the earth. No doubt an extreme location for making wine. That was something António had to discover for himself. As a student with youthful overconfidence, he planted a small vineyard. Even before the first harvest, a heavy storm swept across the countryside and destroyed everything. «It was as if a higher power were trying to say to me: Come back when you're ready», says António. He then spent time in California's Napa Valley, Bordeaux, and the Portuguese mainland. After 10 years he felt ready to try again, and as a result founded the Azores Wine Company in 2014 with two friends. Since then they have restored several age-old vineyards at Pico volcano. The natural forces are now rewarding him with fresh wines that are utterly unique.

Lots of cool wind from the Azores

António Maçanita is a vintner making massive waves. He was not yet 40 years old when he was voted «Winemaker of the Year». His strategy for success? Where others don't even thinking of venturing, António sees a challenge. Whether as a bodyboarder in the unruly waves of the Atlantic, as a rugby player running into a standard defensive wall or as a vintner in a difficult growing region. In earlier times, the Azores were a world-famous wine region – their white wines were highly valued in the houses of nobles. Yet at one point, the viticulture nearly ground to a halt and was increasingly forgotten. The work in the middle of the Atlantic was too laborious and unpredictable. And yet the vineyards on the volcanic island of Pico are utterly impressive: so that vines could be planted in the first place, the island's inhabitants had to first break up the bed of lava. Walls were stacked up with the piles of black rock. These centuries-old «currais» protect the plants from the strong winds of the Atlantic. António's vines grow 50 to 300 meters from the roaring sea. The surf and wind bring salty seawater to the vineyards, which actually gives the wine a salty touch. «Our wines are unique, pure, fresh, and daring, and have a pinch of salt... just like life!», says António with an emphasis that causes our trend barometer to increase. His Verdelho is our new Azores High! Dieter Meier fascinates as a person and as a winemaker

With songs like «The Race», «Oh Yeah» or «Bostich», Dieter Meier and his band Yello shaped the beginnings of electronic music. But he was ahead of his time not only as a musician. Dieter Meier is and remains a visionary who constantly reinvents himself. So today he is known as an artist, actor, writer, vintner, cattle breeder, chocolatier, restaurateur.... With so many professions and vocations, one immediately imagines a man who rushes from one appointment to the next. But far from it! Dieter Meier lives for months on end in the seclusion of his farm in the Argentinean pampas, where – as he says – it is «wonderfully boring». There, the bon vivant finds the time and space to hatch new ideas. He has a clear vision for his winery: «It is our goal to produce the best organic wines in the world – and that is possible in Argentina!» says the globetrotter. The country has fascinated him since his first visit at a young age. In 1997, he purchased the historic «Ojo de Agua» farm and began producing organic beef and wine. At that time, organic farming was still in its infancy. Dieter Meier's wines have since gone around the world like the legendary beats and lyrics of Yello. They have long since become a phenomenon, just like their maker. 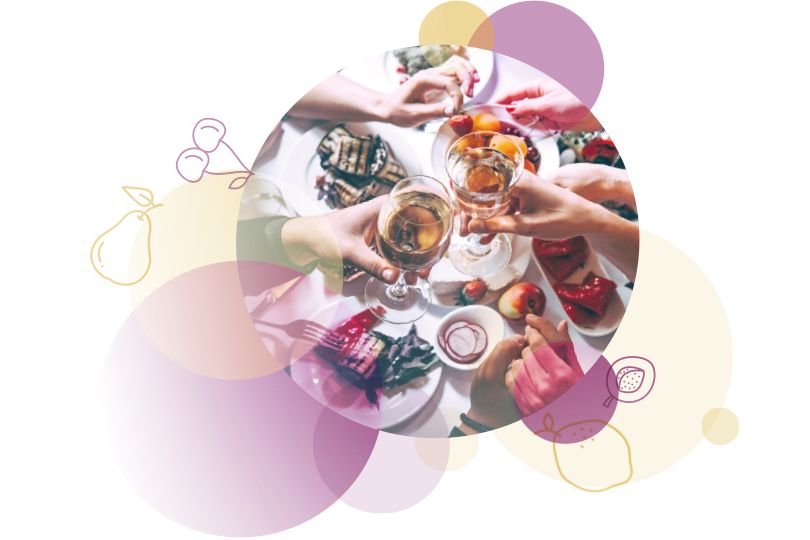 The dream team for socializing

It's entertaining, inspiring, cozy and definitely a great piece of happiness: the light-hearted togetherness with a diverse group of nice people. We find it so enriching to share a wine with different personalities, listen to their stories and laugh until the tears come. Our «Ricco» wines fit the bill, offering something for everyone and anyone. The selfie queen is guaranteed to want to post a picture with the casual bottle. The doubter of the clique will find fault with the fact that Luca Maroni «only» gave it 98 points and not 100. The driver will be very annoyed that he volunteered to be a cab today, of all days. The wine freak will spread out the advantages of the Appassimento process in detail in a spontaneous lecture. The party boy cuts him off, saying that the important thing is that the wine tastes good. The romantic doesn't notice any of this, because she is wistfully reminiscing about her vacation flirt from Apulia and stares into the wine glass with a rapt look until the grief-stricken aunt asks her if everything is all right. Meanwhile, the klutz already spills the first glass. Even the beer drinker in the group thinks it's a pity, because this wine tastes really good to him. Yes, the «Riccos» are real all-rounders. Not only do they go well with everything from a culinary point of view, but they also playfully manage to combine very different wine personalities. Our dream team for large, uncomplicated rounds!

Our gold find in northwest Spain

We, the Flaschenpost team, are always on the lookout for new, exciting wine experiences. In doing so, we particularly like to move off the beaten track. Our sixth sense for fine white wines recently led us to the rather unknown wine-growing region of Bierzo in northwestern Spain. However, we did not expect to find a new favorite wine right away. However, the area has already provided the ancient Romans for euphoria, because they operated there the most important gold mine of the Roman Empire. Today, the Gancedo winery is located very close to this gold mine. It goes without saying for the Cerejio family that their soil is worth its weight in gold. They see it as the basis for healthy, tasty grapes. Accordingly, the vineyards are worked gently and close to nature. José Cerejio is convinced that this is the only way to «dig the gold out of the grapes». He will know, since he worked as an engineer in the mining sector until his retirement. This white wine from the Godello variety, typical of northern Spain, is wonderfully balanced: Freshness, fruitiness and power keep the perfect balance. A real gem of a wine! «The wine is his yearbook of life.»

How Christoph Edelbauer draws from the full

«I love nature, its beauty, its power – but also its unpredictability», says Christoph Edelbauer. While other winemakers fear capricious weather and hope for consistent climatic conditions, the young Austrian sees it as an opportunity to «experience nature with all your senses and draw from it». It is this creative and lively approach that characterizes the work of the convinced organic winemaker: «Viticulture is like an adventure that begins anew every year. As eager as a child like a child, you wonder whether the winter will be snowy. Whether the spring will be wet and whether a late frost will surprise us. And the summer? Will the sun tickle the best out of the grapes?» All the experiences of a year are stored in the berries, says Christoph Edelbauer. He therefore sees his task as a winemaker in reflecting these in the wine: «Here it becomes visible how the year was, who we – the grapes and I – are.» That's why he doesn't make traditional labels, but instead writes down what he tastes, what the wine reminds him of – and puts it on the bottles with screen printing. Christoph Edelbauer demonstrates an admirable sensitivity for the living product that is wine. This is how he succeeds in creating unique creations. Year after year.