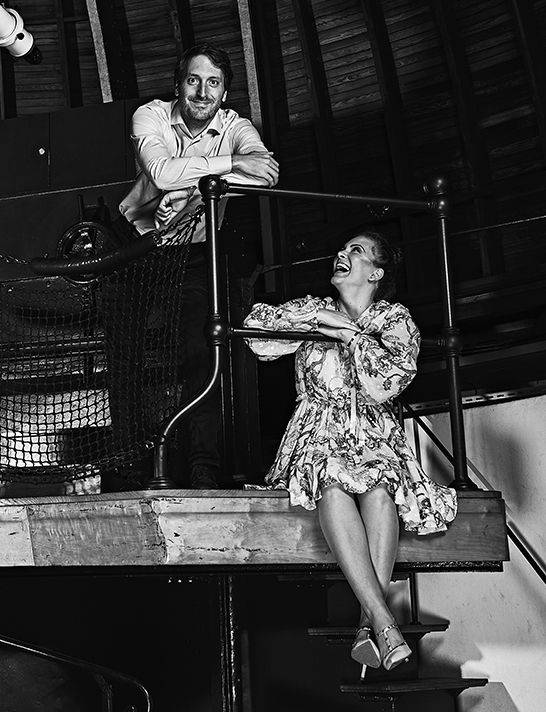 They Reach for the Stars

«There is so much more in a glass of wine than fermented grapes. In the best case, it is an expression of the souls of those who make the wine. At Le Stadère it is especially apparent: A pair united by a great passion for astronautics brings us closer to the heavens through their wine, and invites us to look up more often and expand our horizon. We wish you many hours of spectacular stargazing accompanied by a good glass of wine.» 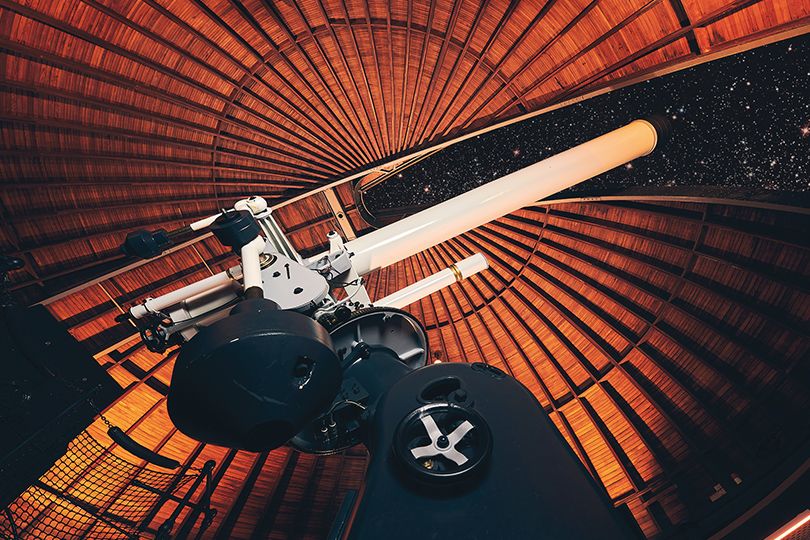 «Wine is an age-old dialogue between heaven and earth.» – Olympia and Alberto Parrini

The new star in the Tuscan sky

When Alberto was a little boy, he would often go on walks with his father through the family's vineyards and observe his grandparents as they worked. The reverential movements, the earthy smell – in Alberto's eyes, these had something ritualistic, almost magical about them. His fascination with the earth hasn't loosened its hold over him. However, this never stopped him from dreaming of the infinite. As a result, he ultimately moved to Milan to study space technology.

As an engineer with a doctorate, Alberto's wife Olympia is also involved in astronautics. As a child of Greek-Polish immigrants, she grew up in a high-rise in Darmstadt. «I spent hours observing the sky and asked a lot of questions about the universe. While my friends adored the Backstreet Boys, I was a fan of Neil Armstrong.» Like the first man on the moon, Olympia and Alberto want to leave behind a footprint that will stand the test of time. They were very aware of this when their daughter Stella was born. The time had come to make their long-cherished dream of owning their own vineyard a reality: «It's unbelievable how tangible memories and dreams can become if we resolutely pursue them and if the people we love share them with us», says Alberto. Today, Le Stadère family vineyard in the Maremma is a place of connectedness, a personal anchor point where the young family can live peacefully.

In both the Sestile and Effemeridi wines, a fascination with the heavens meets a fascination with the earth. Sestile – «sextile» in English – refers to a 60-degree angle between two planets and the Earth. In olden times, this constellation was considered a good omen if it appeared when a person was born. «We're not sure if the heavens influence an individual's personality. However, we have no doubt that the Meremma's clear and sunny skies shape the character of our wine», say Alberto and Olympia.

A universe of aromas in a bottle of wine

The Maremma is a place where the heavens and the earth seem to touch each other. The spacious landscape, nutrient-rich soil, and constant sea breeze are ideal for viticulture. The Morellino di Scansano is the region's flagship. It is among Tuscany's most important wines, alongside the Chianti, the Brunello die Montalcino, and the Vino Nobile di Montepulciano. What the four have in common is that they are mainly made from pressed Sangiovese grapes. The Morellino di Scansano DOCG appelation is among Italy's booming wine-growing regions, especially ever since Tuscan giants such as Antinori and Frescobaldi established vineyards here. Furthermore, this smooth and full-bodied Sangiovese version is well-suited for present-day tastes. With Le Stadère, Olympia and Alberto Parrini own a small vineyard in a unique terroir. In the vineyards and in the wine cellars, the two of them are supported by the agronomist and enologist Gabriele Gadenz. The scientific curiosity of astronautics specialists meets the knowledge of the wine expert. Together they create wines that enable us to look beyond the boundaries of the ordinary: «For us, the Effemeridi is the ideal result of thorough research. It's a complex and visionary wine.» For this reason, this reserve was also named after the map with which man has sought to determine the movements of the heavenly bodies since antiquity. Through the exact observation of nature and its cycles, future events could be calculated. Astronomy and viticulture therefore have some things in common in this regard. «The emphemerides served as an orientation point for humans in their innate urge to cross borders», explains Olympia. In earlier times, these maps were important for navigators during their discovery voyages. Today they are essential for astronauts. In fact, the «Effermeridi» goes beyond the piquancy and crispness that is typically associated with the Morellino and offers a surprising texture and well-roundness. It's quite possible that one would initially feel a bit overwhelmed in this seemingly endless universe of aromas and taste sensations. Like when gazing at a night sky full of stars.

«Colors and scents of a fascinating island»

Compagnia Siciliana 1921 shows Sicily from its best side

The turquoise sea rushes, the citrus groves refresh the hot air with their aromas. The food is heavenly. The eye meets colorful ceramics at every turn. From the bustle of Palermo to the sublime tranquility of the ancient temples of Agrigento, Sicily has so much to offer. Founded in 2015 by star oenologist Mario Ercolino, Compagnia Siciliana 1921 manages to beautifully intertwine tradition, modernity and culture in its wines. Mario spent his childhood on his parents' vineyard. Even as a young boy, he was fascinated by how his father depicted nature in the bottle. Mario went on to study enology and worked for many years as a cellar master at San Marzano. With wines like the Primitivo «Sessantanni» he contributed significantly to usher in a new era of top quality products. Today «Super Mario» is one of the most influential oenologists in southern Italy, artfully depicting the origin in a wine has always remained his guiding principle. «Every wine must be a sensory journey», he claims. With his «Compagnia Siciliana 1921» he succeeds perfectly. Visually, these wines are inspired by Sicilian lace, which you still see mostly on wedding dresses today. This fits perfectly, because there is so much richness and sweetness in these wines that one immediately feels transported to a debauched Sicilian wedding celebration. The lushness is balanced by a cheerful freshness. Typical Sicily. 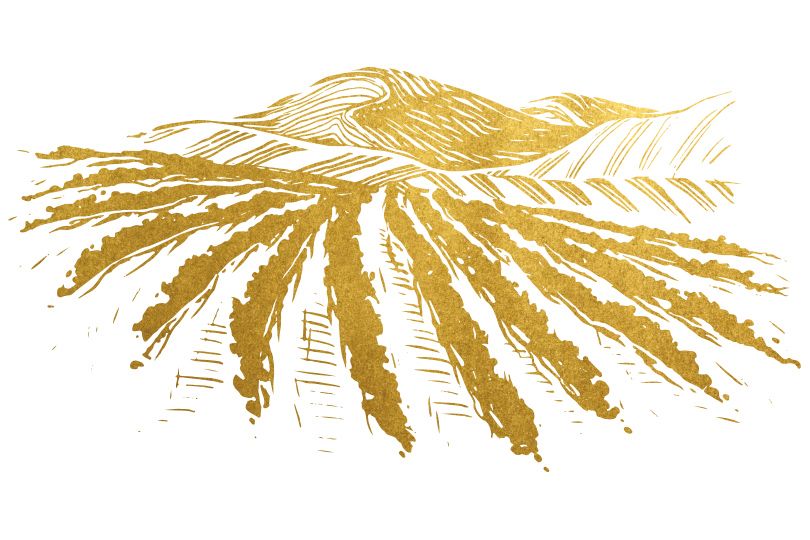 The Primitivo for festive occasions

When the sun hits Puglia's vineyards, everything seems bathed in gold. The seemingly endless expanse leaves a feeling of freedom. It almost seems as if this graceful area was created solely for dreaming and creating. The ferruginous soils and the many hours of sunshine offer the best conditions for viticulture. The Primitivo Onoro O is made from the grapes of old vines. The plants grow here in the form of small trees without any support systems such as wires or stakes. This form of cultivation is as old as it is labor-intensive – and that is why it has almost disappeared in recent decades. But what makes a wine from old vines so special? From an age of about 40 years, the vines produce significantly fewer grapes. In return, the few fruits are supplied with more nutrients. This in turn leads to more concentrated wines. Thus, Onoro O is indeed a wine that honors the generous nature and the glorious wine culture of Puglia.

The winery Valtravieso is located at about 950m above sea level, making it the highest winery in the D.O. Ribera del Duero. It is located on a barren plateau with nutrient-poor soils and extreme climatic conditions. In late August, it's common here for the thermometer to climb to 35°C at noon and drop to 5°C at night. While we would probably sour here, there is nothing better for grapes to stay healthy and fully ripen aromatically. Moreover, winemaker Ricardo Velasco is often confronted with a rough wind during his work. But the daily challenge excites the young oenologist – and with a lot of patience he wrings first-class wines out of the terroir. At the age of just 26, Ricardo became the oenologist in charge at Bodegas y Viñedos Valtravieso. Under his leadership, Valtravieso has established itself as one of the most established itself as one of the wineries to which the region owes its international popularity. Due to its particular location, Valtravieso wines have a unique profile with mineral and fresh notes. The terroir is undoubtedly the basis of the success, but the decisive factor is the meticulous approach of Ricardo and his team: «We work our vineyards with maximum respect and minimum intervention, which is why we don't use herbicides or insecticides.» Conclusion: a posh top wine!

With our decision tree in the digital version of Flaschenpost magazine we make your choice even easier!

He looks good and makes it tingle properly... May we introduce? Meco, a Venetian with the best taste. Fruity, floral and with tingling perlage.

Modern, dynamic, different: Bienvenue chez Nicolas Feuillatte! This champagne is fresh and impulsive. When the ideal serving temperature is reached, golden stars appear on the bottle.

A cava with elegant perlage, refreshing acidity and subtle brioche notes. Rebellious, stylish, unique. The sparkling wine for those who like to step out of line.

The Who's Who of great sparkling wines

If you want to immerse yourself in the world of «bubbles», you can't avoid these three greats: Champagne, Cava and Prosecco are the most popular types of sparkling wine in Switzerland. Once you understand the differences, you'll be able to move through all festivities in style.

Rule number one: If an event really impresses you, then champagne is in demand. The reverse is also true: if you want to make an impression, serve the famous original. The traditional sparkling wine from northern France is synonymous with glamour; it's the Louis Vuitton bag of bubbles – iconic and expensive. Did you know that Spanish cava is produced in the same way as champagne? In the «Méthode traditionelle», yeast and sugar are added to a light white wine so that a second fermentation can take place in the bottle. This produces CO2 that cannot escape – our beloved «bubbles». With a cava, you celebrate taste and show off style without showing off. In addition to bottle fermentation, there is also the tank fermentation process. Since it requires much less effort from the cellar master, these sparkling wines are less expensive. In addition, they have no yeast notes, but rely fully on freshness and fruit. No wonder prosecco is so popular! These uncomplicated bubbles always go well, and are just as suitable for an aperitif as they are for dessert. So then, into the sparkling pleasure!